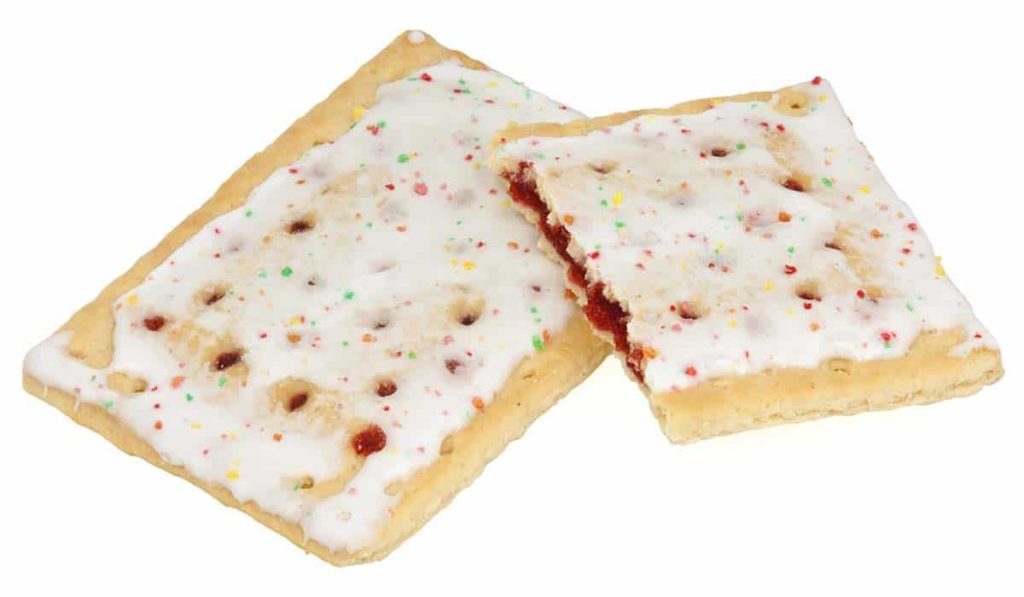 The quest to build body mass and gain muscle is one that drives most bodybuilders into eating different things at different times. One such food items are Kellog’s pop-tarts which began production back in the 1960s and it has continually remained quite popular with sales reaching about 2 billion annually. Pop-tarts are quite popular in the United States, the United Kingdom, and Ireland. One question that however resonates in the circle of bodybuilders bothers on why body builders eat pop tarts.

Why do bodybuilders eat pop tarts?

Pop-Tarts are not a staple for bodybuilders, however, quite a number of them eat them because they are affordable and a good source of calories and carbs. These are vital when building body mass and working out. In addition to this, they are usually properly packaged. When building up, calories and proteins are very important. It usually appears that the only diets that gain widespread popularity are the ones that help people lose weight.  One thing you would, however, realize about bodybuilders is the fact that they eat things that do not have a semblance to what other people eat.

Another time when a bodybuilder may want to consume pastries would be before competitions to maximize vascularity while also making sure the muscles pop.

What Are The Unique Benefits Of Pop Tarts For Bodybuilders?

There are a couple of reasons why several bodybuilders opt for pop tarts when building up, here are a few of them:

This brand kicked off initially with four flavors which included brown sugar cinnamon, apple currant, blueberry, and strawberry.  They were not frosted initially, however, with time, they gained traction and frosting became a part of the process. As a result of its popularity today, they come in several flavors about 29 of them.

What Makes Pop-Tarts Popular In The Bodybuilding Community?

Pop-tarts are quite popular among bodybuilders due to several reasons. They are usually viewed as a fruit-filled breakfast pastry which can be heated in a toaster before they are eaten. However, several people prefer to eat them cold. The main reason for the increasing popularity of pop-tarts among bodybuilders stems from the fact that they can be deployed as a carb tool of choice. They are seen as a quick source of carbs.

Many think that pop-tarts are not just good in tastes but also give the requisite amount of body carbs with low fat. This, therefore, makes them ideal for pre and post-workout.  There are however people who say it has zero nutritional value and is full of sugar.

What Is The Impact Of Pop-Tarts On Muscle Gain?

You should already be aware that training plays a huge role in the depletion of the body’s glycogen levels. Glycogen simply refers to the broken down carbohydrates which are usually stored within the liver, muscles and body tissues. It, therefore, suffices to say that for one to fill these stores, you will need carbs in your body. Also, carbs are a vital component of the entire workout process.

The process of training is a very stressful one for the body and the body usually releases cortisol as a form of an external stressor. To reduce the volume of cortisol in the body, an increase in insulin levels is vital. Both cortisol and insulin work hand in hand. An increase in the insulin levels would mean a drop in the cortisol levels thus leading to a vital cycle in this regard.

The simplest way to create an insulin spike would be to consume more carbohydrates. One quick way to get a quick supply of insulin in the body would be through some of the best supplements in the market. Also, using fast-digesting sources of sugar are a perfect way to go about this. The quicker the digestion process of your source of carbohydrate, the quicker you get a spike in the level of insulin. This is where fun and delicious sources such as pop-tarts come in.

Pop-tarts are simply sugar. These sugars contained in them are made up of different forms of dextrose. Sucrose, fructose, and fructose corn syrup. It should be noted that glucose is the main source of carbs for the post-work-out process. The main aim of taking in lots of carbohydrates during the post-workout process is to replace the glycogen levels within the muscle. It is however important to mindful that while going for fast working carb choices; you should also go for the smart ones. They must be low to nonfat in content for the ideal results.

In summary, pop-tarts are quite popular among bodybuilders because they fit the criteria required for the desired results. They are delicious, easy to carry, come in different sizes and flavors thus making them a wonderful choice.

One thing that is guaranteed when you open one pack of pop-tarts is that you will finish it all. The fact that more bodybuilders are taking interest in it is a pointer to the fact that they are doing something right. The reasons for the love of pop-tarts in the bodybuilding community can be traced to its perceived nutritional benefits and as such, it can only become more popular.

7 Things Your Vagina Is Trying To Tell You (Listen Up!)

Melissa is an experienced Registered Dietitian-Nutritionist in private practice and expert Health Content Writer in the field of nutrition. She is always keeping up with the latest food and nutrition trends to keep her readers informed, breaking down the research into practical guidance. Through her writing, she helps educate and motivate readers to take charge of their health so they can feel their best.