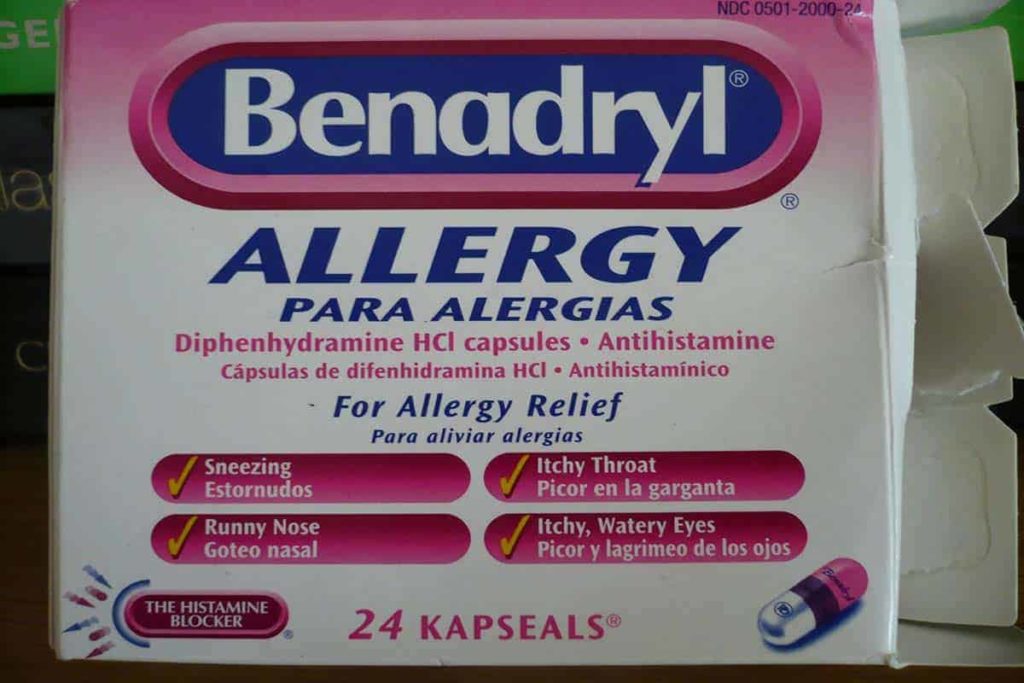 Benadryl or Diphenhydramine is an antihistamine that is usually used for tackling hay fever, allergies, cold, fever, flu and other related symptoms of allergy. It is also used for tackling sleep-related issues as well as anxiety due to its sedative features. The length of time it stays in the system is largely dependent on the half-life.

How long does it take for Benadryl to work?

The question “how long does it take Benadryl to work” is one whose answer depends largely on the nature of the allergy. In the case of food allergies, it takes between 30 minutes to one hour. In the case of allergies to nature are animals, the results may begin kicking in within 20 minutes.  If it is taken orally, it must get into your bloodstream through the digestive system. In adult humans, it usually takes about 30 minutes after which the symptoms will steadily decline.

What Is Benadryl Half-Life Period?

The half-life simply talks about the time after which 50% of the drug will be removed from the system. Benadryl has a half-life that ranges from between 2.4 hours to 9.3 hours. Also, the median half-life is about 4.3 hours in young and healthy adults. Dependent on the median value, it is estimated that the drug should be flushed out completely within 49 hours. The concentration of the drug is on a level between 2 to 4 hours.

What Are The Factors That Affect The Half-Life Duration?

Fifty percent of the side effects associated with this drug begins to wear off after the half-life is eliminated. It should, however, be noted that the long-term effects of this drug do not wear off quite easily.

The length of time Benadryl stays within your system is largely dependent on these factors outlined below:

The frequency via which diphenhydramine is used plays a huge role in determining how long it would stay within the system. The usual dosage suggests it should be used once every 6 hours. If it is used once daily, the effects soon start wearing off as against when it is used a couple of times each day.

However, consuming it once a day may not prove to be an effective strategy for treating the issue it is meant for. Depending on the half-life, the drug may last longer in the system if it is consumed every 6 hours.

The amount of dose of diphenhydramine which you use will play a huge role in determining the length of time it stays in your system. What this means is that a person who consumes a higher dose of the drug may require a longer period to rid his system of the drug. For instance, a patient that consumed 100mh of this drug into his system will still have about 50mg of the drug in his system even after the half-life must have elapsed.

3. Interaction with other drugs

This, in turn, leads to increased side effects as well. Some other drugs that interact with diphenhydramine by adding to the time it stays in your system include hypertension drugs, Lorazepam, and cold and cough drugs. Using Zyrtec and Benadryl together could also increase the time required for the effects to wear off.

Regardless of the half-life of Benadryl, combining it with alcohol may have a rather telling effect on you. This may also have a strong effect on the time which the Benadryl remains in the body.

age plays a vital role in the determination of the half-life of diphenhydramine. It is instructive to note that the half-life of Benadryl is quite shorter in adults and kids when compared to elderly folks. In the case of the former, they can easily rid themselves of Benadryl quicker than adults above 65.

The total health of a person goes a long way in determining the time needed for it to remain in the system. Because all drugs are metabolized within the liver and passed out through the kidney, the health of both organs plays a vital role in this case.

t means that if they are healthy and properly functioning, they should be able to flush out the Benadryl from your system. If a problem arises in either of them, it would mean a longer time for the drug to stay in the system.

In a similar vein, for the flushing of diphenhydramine, the metabolism of a person also has an effect on it. In the case of Benadryl, a metabolism rate that is faster would mean quicker expulsion of the drug from your body when compared with folks with a less quick metabolism.

Does Benadryl Indicate On A Drug Test?

According to a study carried out, it was deduced that there could be a false positive for methadone when someone ingests diphenhydramine. Also, additional detailed testing would be needed to discard it as a false positive.

How Long Does Benadryl Usually Stay In The Body?

The length of time Benadryl stays within the body is largely dependent on its half-life. After a day or two, the majority of the diphenhydramine should be flushed out of the system. However, when a urine test is conducted, you may still be able to detect its presence within the urine for about 4 days after consumption.

How Long Does Benadryl Last In The Blood?

What Is The Length Of Time Diphenhydramine Stay In Your Saliva?

The time which Benadryl stays within your saliva is the same as the time it takes in your urine or blood.  This is about 4 days after you stop using the drugs.

How Can You Flush Out Benadryl From Your System?

There are a couple of factors that influence the length of time which Benadryl remains in your body. How long it remains in your body is largely dependent on the half-life of the diphenhydramine. However, you can take the following precautions and actions to rid your body quicker of Benadryl:

Having found out the answer to the question of how long does it take for Benadryl to work, it is important to note that proper use of the drug matters. It, therefore, suffices to say that if you are consuming the right volumes, you would not need to bother your head about the possible effects. If you, however, experience any negative sign after consumption, it is advisable that you consult medical personnel for quick attention.

Minnie is an experienced Registered Pharmacist, having earned her Doctor of Pharmacy degree at Pacific University. Minnie has recently worked at Moda Health as a Clinical Pharmacist in their Government Programs group. She also has a B.S. in Journalism from the University of Oregon.