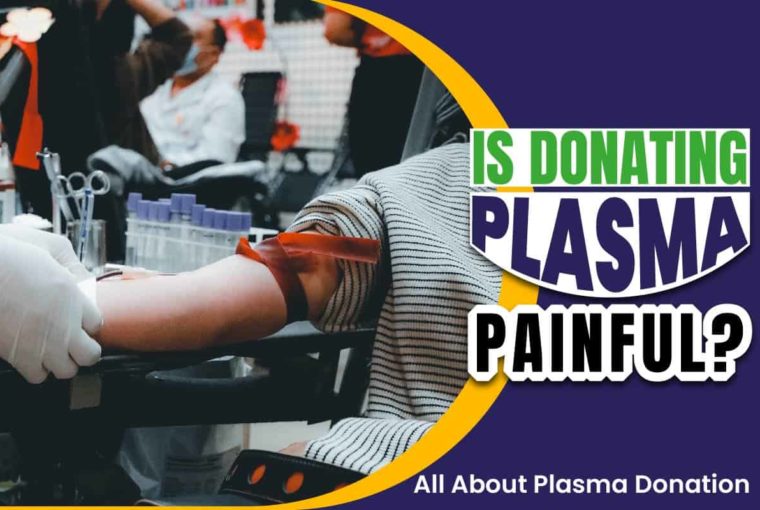 Plasma is often known as the “elixir of life” because of how vital it is in maintaining good health and for treating critical conditions. Since it is indispensable for a human being, plasma donations are often made.

That being said, there are many debates and questions regarding plasma donation. Therefore, you should refer to this article to gather all the necessary information concerning this topic.

So, Is donating Plasma Painful?

Plasma donation is not that painful, but it isn’t an absolutely pain-free process either. Based on tolerance, the degree of pain differs for people. In general, people have remarked that donating plasma gives as equal pain as being stung does.

Why Is Plasma Donation Required?

Just like blood donation, plasma donation is a delicate yet in-demand process. The transfer of plasma is often conducted in hospitals, and high prices are paid for it. But why exactly is it so important? Well, it is because of the following reasons:

A common function of blood plasma is to maintain the pH levels inside the body. If the pH balance of the body is disturbed for any reason, plasma transfer can help revive it.

Patients often suffer from bleeding disorders or clotting factor disorders. Even a minor injury might prove to be fatal for them. For them, a plasma donation is a treatment option.

Other than bleeding disorders, some other physical disorders require plasma donation as a treatment. Immune deficiency disorders, rare genetic disorders, fatal diseases, etc., are some examples.

Plasma donation also helps to maintain irregular blood pressure. Besides, by controlling the blood volume through plasma donation, shocks and blood clotting can be treated.

Before getting into this part, we’d like to outline the differences between blood and plasma. People often confuse the two, but they are not the same thing.

Plasma is only a part of the blood. It is the liquid portion that constitutes about fifty-five percent of it. In plasma, white blood cells and platelets are dispersed. Other than that, it also contains water, hormone, proteins, fats, etc.

Now, although plasma is a part of blood, it is much more expensive. Besides, the process of extraction is also different. Hence, blood centers and plasma centers are essentially different as well.

In a blood center, blood is extracted using a syringe. But, plasma is removed following a process named plasmapheresis. In a plasma center, plasma is separated from the blood via the mentioned process, and then the remaining constituents are inserted back to the donor’s body.

Plasma, after being extracted, undergoes disintegration. Different components from plasma are then used in pharmaceutical and chemical industries. Besides, for a patient, it is a safer option compared to blood.

The most common side effect of plasma donation is dizziness. It is a mild reaction to the sudden loss of plasma and can lead to fainting.

Some people get bruised during plasma donation or right after that. Bruising can also lead to bleeding. Under normal circumstances, it is not a serious side effect and fades within a few days.

There are also some other side effects such as allergic reactions, infection, etc.

As for the risks, the risk of your plasma being illegally used and your health being jeopardized during the process are valid.

During plasma donation, there are a few things that you should maintain to avoid risks as much as possible. These are:

Visiting Authorized Centers: Many of the risks will mitigate if you visit a safe, authorized donation center. Try to avoid unfamiliar centers.

Regulating Donation Frequency: You can only donate plasma after a specific period of time. To maintain good health, keep a check on your donation frequency.

Using distilled Apparatus: Make sure the syringe and all the other apparatus used on your body are completely sanitized and clean.

Remaining Well-hydrated: It is common to face dehydration after plasma donation. Hence, drink a lot of water before the process.

1. How many times can I donate plasma?

You can donate plasma up to two times a week. However, even with this frequency, you should take breaks often. Besides, there should at least be a two-day gap between each donation.

2. What is the most needed type of plasma?

This answer depends on the most needed type of blood group. Plasma from rare blood groups is more in demand. However, since AB is the universal receiver blood type, it is most requested.

3. Am I eligible to donate plasma?

If you do not have a chronic illness, severe disorder, or bleeding irregularities, you should be eligible to donate plasma. There are a few health prerequisites for a plasma donor. Always check if you meet those requirements before donating.

4. Is it safe to donate plasma?

Yes, if it is done following all the necessary precautions, plasma donation is completely safe.

5. What is the difference between donating blood and plasma?

If you donate blood, the blood is directly drawn from your body and disintegrated later. But with plasma donation, the disintegration of constituents occurs immediately, as a part of the process.

As we conclude this article, we hope you learned all about plasma donation. Next time people ask, “is donating plasma painful?” you can easily answer them using your insights.

Now you know both the uses and adversities involved in plasma donation. If you ever take part in the donation process, maintain caution. Good luck!

Is Bath and Body Works Soap Antibacterial | A Detailed Answer