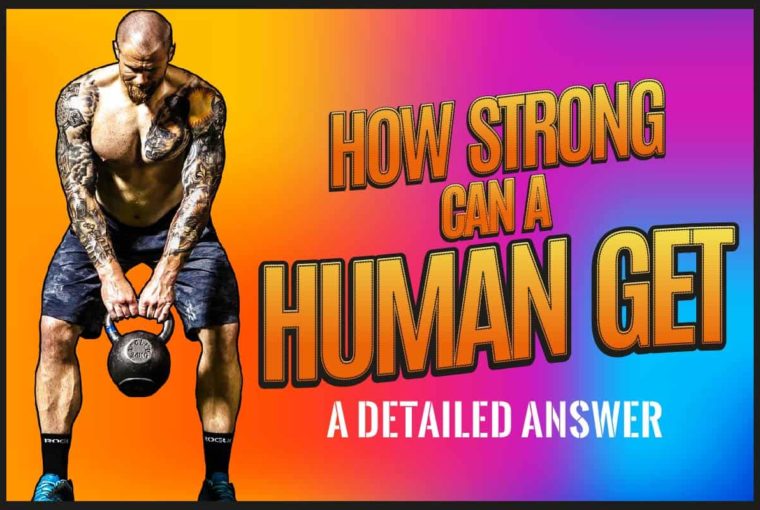 We have all wondered at some point exactly how strong we as humans can get. Sure, we have seen athletes performing feats of incredible strength to be crowned champion, but we also heard tales of ordinary people rescue their kids from fire hazards with Herculean strength.

While there are no scientifically proven underlying factors that lead to the answer of how strong can a human get, some factors such as different methods of exercise, the subjectivity of pain, and incidents of adrenaline rushes get us closer to the answer.

The only common factor would be that in both of these cases, the people got to use more than 1/3 of their brain to demonstrate strength. Also, where trained professionals can get their brains to use 80 – 90 percent of power, ordinary people can only go up to 70 percent.

What Role Aerobic Exercises Plays In Becoming A Stronger Human

Firstly, when it comes to the strength of athletes who can use 80-90% of the total strength the human body is capable of, theirs is achieved through repetitive exercises and extreme diets that can help build up muscles.

One of the methods that are commonly used to measure their fitness and strength is maximum aerobic power. The aerobic power describes the functional capacity of the cardiorespiratory system and is defined as the rate at which oxygen can be used during a specified period to utilize oxygen.

Maximal aerobic power is a useful tool to measure physiological fitness by professionals so that they can utilize their track progress with their clients.

Often it is referred to as VO2, where ‘V’ means the volume consumed every 60 seconds, and VO2 max is used to express the mm of oxygen taken per kg of body weight per 60 seconds.

It indicates the max rate of oxygen consumption while exercising or the highest rate of consumption of oxygen and distribution in the body.

One of the key reasons behind differences based on sex is due to disparities in body composition and the size of the heart.

While adult women who are very active physically have 30% body fat, men of their age and level of inactivity have about 16% body fat on average. However, calculating aerobic capacity evens out the sex difference.

How And Why Anaerobic Exercises Makes Us Stronger

On the other hand, anaerobic exercises are highly intense activities of short length that break down glucose for energy without using oxygen. These are considered quite extreme, so these exercises also strengthen muscles leading to extreme exhibitions of strength.

Heavy weightlifting, jumping ropes or jumping in general, sprinting, biking, and high-intensity interval training would be some of the most common anaerobic exercises. And regularly practicing these exercises will definitely boost your strength.

Adrenal Rush And How It Can Be Linked To Extreme Strength

When it comes to ordinary humans performing feats of hysterical strength, it only happens during life-or-death situations.  And it can only be possible when the situation has triggered a surge of adrenal from the adrenal gland, which releases the hormone directly into the bloodstream instantly.

Adrenaline rush is a vital defense mechanism of the body that is caused when humans sense an imminent physical or imaginary threat. It helps your body react quickly by making your heart beat faster, increasing blood flow to the muscles and the brain while stimulating the body to make more sugar to use as fuel.

Acts such as watching a horror movie, cliff diving, bungee jumping, and anything that triggers your fight-or-flight responses will trigger adrenaline rushes. And in situations where you need to save a life, the adrenal rush might be the key factor behind how you can dodge a moving car without having to think first.

Though the extreme strength that the adrenal rush provides can not be tested in a lab- as only a life or death situation allows your brain to tap into extreme strength, it is proven that the strength is caused by adrenaline.

The pain of breaking through doors might seem unbearable, and the feat alone impossible to us, but trained firefighters can do so without feeling intense pain, as they have trained their brain and increased its pain tolerance. Similarly, athletes also train their brains to tolerate different levels of pain from an early age.

There also might be an underlying genetic component to the subjective feeling of pain, as some of the components of experiencing pain are transferred only genetically.

Pushing The Limits Of The Human Body To Get Stronger

To improve your fitness even when your brain thinks you are at your highest level, there are a lot of tricks that you can use. Researchers found that competing with a machine that runs only one second faster than the athlete drastically improved the speed of that individual athlete.

And exercising regularly is one of the sure-fast ways of strengthening both your brain and body.

Comparison of Strength Between Chimps and Humans

When we are comparing strengths between humans and species that harbor strengths similar to us, Chimps are the one that comes to mind first.

Chimpanzees are incredibly strong and fast. They have denser muscle tissues compared to humans, which lets them generate more power even when both species are using the same range of motion.

How powerful is willpower?

While strong willpower helps us achieve long-term goals without getting distracted by short-term temptations, there is no certain way of measuring willpower.

How do people find the superhuman strength to lift cars?

Adrenal rush plays the key role in an ordinary human being able to show extraordinary feats of strengths, and on some occasions, the feat happened to be lifting cars to save their loved ones.

Is there a limit to human strength?

Yes, as the brain will limit our strengths by one-third to ensure that our metabolism does not get high to the point where it might result in death.

Do you get stronger by doing aerobic exercises?

Aerobic exercises are usually referred to as cardio exercises, and these exercises are tailored to improve cardiovascular activity. So, while these will help you increase strengthening muscles, they will not build muscles distinctively.

So, how strong can a human get?

The researchers are yet to find significant similarities and underlaying factors between the strength of athletes and ordinary people in life-or-death situations.

And despite a lack of a definite answer, understanding the factors take us closer to finding the connection between these incidents and how human bodies can get strong.

How To Fake A Back Injury ? The Art Of Faking Like A Pro!

Is Becoming A Physical Therapist Hard? Learn The Pros And Cons